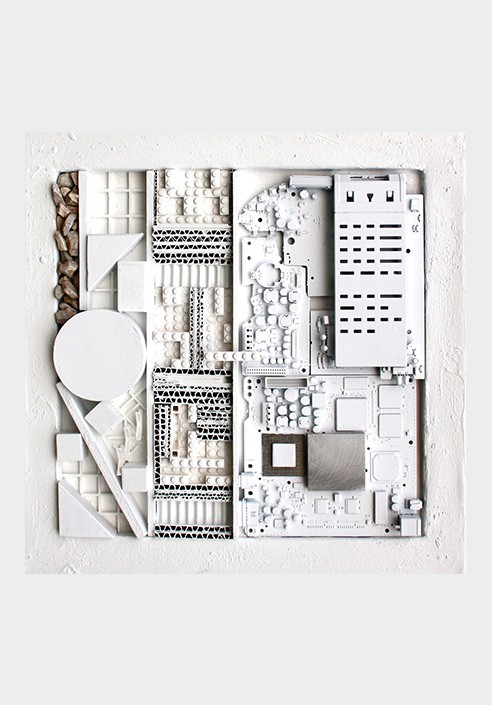 Acrylic on panel and multi-material iron black 60x60 cm. Polymateric and acrylic on canvas 40X40 cm fixed panel of black iron cm.60X60. The work is signed on the back of the canvas and is accompanied by a card accompanied with authentic, photography, explanation and wooden packaging.

The work is divided into three parts: the first from the left is occupied by the primary elements such as stone and solid geometric archetypes, beginning of organized knowledge. The second layer of cardboard (box par excellence) interspersed with Lego bricks (the building fun by definition). express a wish to protect an age training. In the third part, elements of a pc highlights on the top right of the shell of a remote control. This is to reflect on today's communication and the amount of time it occupies in our daily lives.

In 1974, with other artists is the region of Piedmont to the Giorgi Gallery in Florence in the exhibition "sign Piedmont '74" curated by Aldo Passoni. In 1977 he married the following year opened "Radio Bassano 104" under the name of "DJ Dollar" and works as a speaker in the main local radio stations.
In 1983, with his brother and family, create local "Nineteenth Century" in Bassano del Grappa. In 1988 he was a founding member and President of the Cultural Visual Arts "ACAV '88." In 1984 he produced and directed in its "nineteenth century" a space called "PAGINAPIEGATA art gallery" devoted exclusively to contemporary art and culture. From 2007 to 2010, Vice-President of the High School of Art "Fabris" Nove (VI).

In 2002 he started the season, still in force, the small size of square canvases that individual or associated with each other in the case of autonomous cells or tiles, creating possible assemblages constantly changing. In 2010, 2011 and 2014 held workshops on the Dada movement and Arte Povera at the Art School "G.De Fabris" Nove (VI).
In 2012, 2nd place in the exhibition dedicated to the memory of Holocaust victims "Transportation" organized by the municipality of Breganze (VI). It 'in the Catalogue of Modern Art (the Italian artists of the early twentieth century) 47 of 2011 published by Giorgio Mondadori.
Since early 2013 is registered as a free profesionista "Curator, artist and art promoter." In the same year, revives the name "Page Bent" with the extension "Interdependence of art" consisting of a series of meetings to cross cultural acts / meet all fields of creativity.